How to Read a File in Python, Write to, and Append, to a File 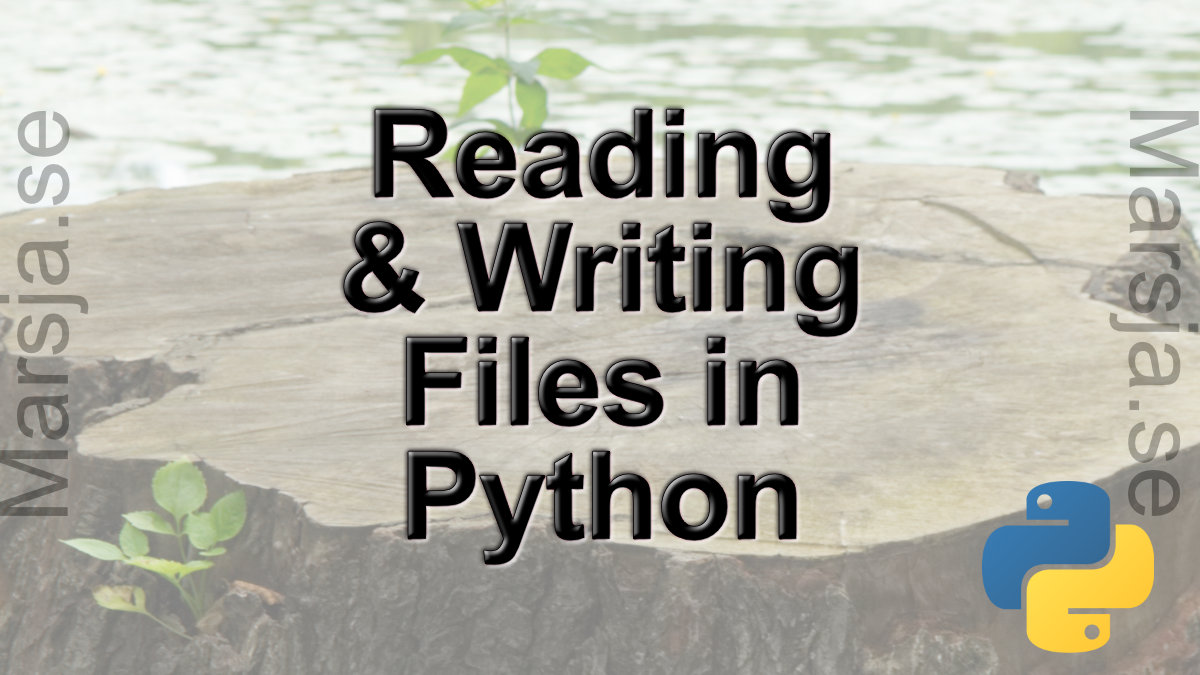 In this Python tutorial, we need to have Python 3 installed. One of the easiest ways to install Python is to download a Python distribution, such as Anaconda, ActivePython, or Enthought Canopy, to name a few. Here’s a YouTube tutorial on how to install Anaconda.

Now, when we are working with Python, there is no need to import a library in order to read and write files. Reading and writing files, in Python, is handled natively in the language.

In this post, we will, thus, focus on using Python to open a file and we will use the built-in open function to get a file object.

Now, when we are using Python’s open function, it will return something known as a file object. These objects will contain methods and attributes that we can use to gather information about the file we have opened (much like we’ve learned when using Pandas dataframe objects, for instance). One neat thing, of course, is that we can use these methods to change the file that we have opened using Python.

How do You Read a File in Python?

Opening, and reading, a file in Python is easy: we just type ourfile = open('PATH_TO_FILE') and then ourfile.read().

What Does read() Return in Python?

Now, if we open a file in Python the read() return a Python string object.

How to Read a File in Python using the open() function

In this section, we are going to learn how to load a file in Python using the open() function. In it’s simplest example, open() will open a file and create a file object.

As can be seen, in the image above, there are a couple of arguments that can be used, however, when opening a file using Pythons open() function. The most commonly used arguments, however, are the first two. Note, the first is mandatory and the rest of them are optional. If we don’t add a mode, the file will be opened in read-only mode in Python.

Using the mode argument when reading files in Python

In this section, of the post on how to read a file in Python, we will go through the different modes in which we can read a file. As previously mentioned, if we don’t pass anything with the mode argument the file will be written in read-only. In this reading files in Python tutorial, we are going to work with the following modes:

That is, we can open a file in read-only, write, append, and read and write mode. If we use append (‘a’) we will append information at the end of that file.

A Simple Read a File in Python Example

Now, we are going to read a file in Python using only the file name as an argument. As evident, in the code example below, open() takes a string with the file path as input. In this reading a file in Python example, it is assumed that the example file is in the same directory as the Python script. Or in this case, the Jupyter notebook.

In the image, above, it becomes evident that we have a file object that we have opened in read-only mode. To iterate what we did, we opened up the text file (example_file.txt) without any other arguments. This, in turn, leads to that the file was opened in the read mode. Thus, we cannot write to that file. If we want to print the name of the file we can just type print(exfile.name).

Creating a Text file and Writing to the File using Python

Writing to the File:

Now, in the image above, we can see that we have a file object in write mode (‘w’). In the next code chunk, we are going to add one line of text to this file, Here is how to write a line to our created file:

If we want to, we can, of course, add more lines by using the write method again:

Note, how we closed the file using close() in the last line above. In the image, below, we can see the example file we have created with Python.

How to Read a Text File in Python using open()

In the next Python read a file example, we will learn how to open a text (.txt) file in Python. This is, of course, simple and we have basically already the knowledge on how to do this with Python. That is if we just want to read the .txt file in Python we can use open and the read mode:

This was simple. Now, if we want to print the content of the text file we have three options. First, we can use the read() method. This Python method will read the entire file. That is, txtfile.read() will give us the following output:

Reading a File to a Python list: readlines() Example:

Furthermore, we can also use the sizehint argument. This enables us to get certain lines. For example, the following code will read the two first lines, into two different string variables, and print it:

Finally, when we have opened a file in Python we can also loop through the content and print line by line:

Reading a File in Python and Appending Content to It

Appending Text to the File:

Next, we are going to add content to this using write(), again.

When appending text, in Windows 10 at least, we have to add the \n before the line or else this line will be appended next to the last character (on the last line, of the file). If we are to add more lines, we have to remember to do this as well;

How to Read a file in Python using the with Statement

Now, if we try to use the read() method Python will throw a ValueError:

We get this ValueError because we used the with() statement while opening the file.

Now, the Counter subclass is giving us a dictionary that contains all words and occurrences of each word. Thus, we can print all words and their count like this:

In the code example above, we are looping through the keys in the dictionary and sort them. This way, we get the most common words on top. Of course, reading a file with many words, using Python, and printing the result like this is not feasible.

If we have the need it is, of course, also possible to rename a file (or multiple files) in Python using the os.rename() method.

Reading other File Formats in Python

Drop a comment below if you need anything covered in this or a future blog, and stay tuned!